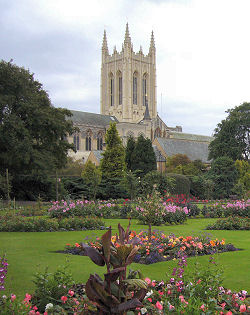 On Christmas day 855, at the tender age of 15, Edmund was crowned King of East Anglia. Historical accounts note that Edmund was a popular and just King. When the Danes invaded, he found himself leading an army into battle against them. It was during a forced retreat one fateful day in 869 that he and his followers were captured, and Edmund was tortured and slain. Legend has it that Edmund refused to renounce his strong Catholic faith, and thus died a martyr. The Abbey, which dates back to 633, was renamed in his honour, and for the next five centuries, pilgrims from all over the world travelled to worship at the shrine of St Edmunds. In fact, St Edmund was held to be the patron saint of England before St George. 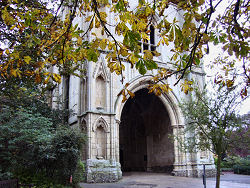 The boundaries and influence of the Abbey steadily grew. In the 11th Century, a stone church was built by the Benedictine monks to replace the existing wooden one. And at the beginning of the 12th Century, a second church, St James, was built within the grounds. Over the years, the relationship between the Benedictine monks of the Abbey and the townspeople of Bury has been a turbulent one. In the summer of 1327, violent riots broke out, during which several monks were killed and the Abbey Gate was destroyed. The current gate was built during the 14th Century, alongside the old one, and still marks the entrance to the Cathedral and Abbey gardens today.

Visitors to the Abbey Gardens should note the two plaques which mark the spot where, in 1214, Cardinal Langton and 25 Barons swore an oath which changed England's history. Seven months later, they compelled King John to sign the Magna Carta, the charter which restored certain basic human rights to the people, most notably that of Habeas Corpus, the right to contest unlawful imprisonment. The 13th Century also saw the erection of the Charnel House, built to store the bones exhumed from the Great Churchyard to make way for new burials. Some of the remaining plaques make for interesting reading, notably that of Captain Bartholomew Gosnold, an explorer and coloniser whose expeditions carried the first English settlers to North America, and who named Martha's Vineyard after his daughter. Cloister ruins in the Abbey Gardens

The Abbey continued to expand during the 15th Century, with work being completed on St Mary's Church in 1427, one of the largest parish churches in the country. Just over a hundred years later, during the English Reformation, Henry VIII began the dissolution of the monasteries. In 1539, the Abbey capitulated to the King's men, who stripped the roofs bare of their lead. Without protection, the exposed timbers succumbed to the weather and fell apart. The townspeople were quick to begin recycling the Abbey's stones and mortar, even resorting to gunpowder on any section that could not be manually broken up. The churches of St James and St Mary and the Abbey Gate and Norman Tower survived, along with the ruins which still remain dotted around the Abbey Gardens. 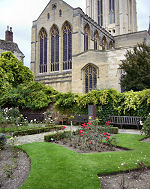 In 1831, landscaping began on the Abbey Gardens, modelled on the Royal Botanical Gardens in Brussels. It wasn't until the 20th Century, however, that they were finally opened to the general public. In 1914, with the creation of the Diocese of St Edmundsbury and Ipswich, St James' Church was granted Cathedral status.

During WWII, Suffolk's flat fields were ideal for Airfields, and 19 were eventually built, used mostly by the USAAF. This influx of troops was so great that by 1944, 1 in every 7 people living in Suffolk was an American. Along with three memorial seats, the Abbey Gardens also houses the Rose Garden with its memorial pillar dedicated to the 94th Bombardment Group. 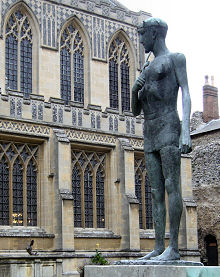 The statue of St Edmund by Dame Elizabeth Frink, which stands beside the Cathedral, was commissioned in 1974, and originally intended for the town centre. With the arrival of the new Millennium, work began on a Gothic revival tower for the Cathedral, created by local craftsmen using traditional materials and methods, and opened in 2005. Inside, the Cathedral boasts a glorious hammerbeam roof, adorned with angels, along with an impressive collection of embroidered kneelers. The Abbey Gardens are free to visit, and there are useful information plaques dotted around detailing the various remaining ruins and buildings. With over a thousand years of fascinating history, the Cathedral, churches, and surrounding Abbey Gardens are an essential stop on any visit to Bury St Edmunds.